At a time when we watch in dismay, shock and helplessness at the horrors Ukrainians face as they attempt to defend their sovereign nation from an unprovoked and unthinkable attack, why when we watch with hearts as families are torn apart, when we see strangers walking around dead bodies on the street, why should we care about letter writing now?

It sounds so banal, but is it really?

Letters, the old-fashioned kind that people wrote by hand, have always connected us. They connected lovers keeping the flame alive when they weren’t together. They connected mothers and fathers with their offspring at school, estranged friends. And they connected soldiers far from home with those they left behind.

Millions of us have saved millions upon millions of these letters. None of us – or I guess almost none of us – save emails to reread them, savor them, relive the memory of a moment to share. E-mails are convenient, but they are not treasures like letters were.

I’m not knocking on emails or suggesting we trade digital speech for handwritten notes. Hell, no. Like most business people, I probably get close to a hundred emails a day and respond to at least half of them, which may just be the start of ongoing email communication. Last year I deleted over 50,000 just from my inbox and thought I was managing them daily. I admit that I could easily eliminate a few of them by unsubscribing, but there is something to be said for pretending that I could invest in certain stocks or create a basket of a luxury good that I could give away to someone in the family. The fact that I never do either does not negate the hope that one day I will.

So the reason for caring about letters has nothing to do with wanting to remove or supplant emails, text messages (do people still do this other than to send a code to complete a change of word password?) or any other engagement on social networks. There are really two reasons to rediscover the almost lost art of letter writing. In some ways they overlap. In others, they are important for distinctiveness.

First, writing a letter takes us out of ourselves. It lifts us above our self-centered mindset and forces us to focus our attention on the person we are writing to. Instead of thinking about what we should do now or do next, we create a message that tells the person who will receive it that we care enough about them to share our thoughts and ideas, to wish them a happy birthday , birthday, to say thank you or simply to say while thinking of you. In short, the simple act of writing a letter brings out a better, more thoughtful, us.

HE ALSO LEAVES ITS PRINT

Great leaders, great literary figures, great men and women are known today not just by their deeds, but by the letters they left behind. Over 2,000 years ago, the philosophers Plato and Aristotle shared their teachings by communicating in writing and teaching this word to students. Even in the modern era, letters have marked history. Among the most thoughtful writings is the April 16, 1963 letter that Martin Luther King, Jr. wrote from Birmingham Jail after the Selma Riots. MLK has dissected all the answers to questions posed by white officials, including why are you foreigners in Alabama? He explained the international links and said he was in Birmingham ‘because the injustice is there’. The famous phrase from that letter “Injustice everywhere is a threat to justice everywhere” became a mantra of causes that arose after Birmingham’s racial rants were traced to a painful and shameful history.

It’s easy to delete an email. It takes a lot more courage to tear up a letter than someone took the time to write. I do not know ? I have drawers full of letters from my daughters, one from my father who died over 50 years ago, cards from college friends, all mixed up with children’s school projects which, like the letters, I could not part. When I think about moving one day, I wonder what I would do with those drawers of paper I’ve saved over the years, and how much easier it is to give clothes, furniture, or laptops a little old-fashioned than throwing away a single letter.

There is another reason to write. It may not be as compelling, but it’s just as interesting. The movement of the hand creating letters and connecting words, says Martha Stewart, the simple act of writing by hand grounds us. It may be true.

But in my far less revered opinion, the reason the nearly lost art of letter writing is more important than ever is because our need to connect, truly connect, has never been so big. The pandemic has separated us from the reality we knew before. The war in Ukraine is tearing our hearts out and the surest way to heal is to do it together, to show others that we care, even if it’s just a few simple lines on a piece of paper. 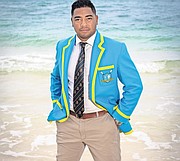 IF YOU drive along Lake Cunningham in the late afternoon and look not at the houses that line the inner lake or the prominent Fusion cineplex atop the hill, but at the shoreline and the water itself, you see what almost looks like a moving apparition – fast, timeless, floating activity, dozens of individuals in sleek rowers, members of a rowing club. They meet every day except Sunday between 4:30 p.m. and 6 p.m.

You are looking at the work of one man who built a team, created an officially recognized sport in the Bahamas, and birthed the largest organization of its kind in the Caribbean.

His name is Kyle Chea. In 2006, he received the highest scholarship in the country, All-Bahamas Merit Scholarship, awarded by the Lyford Cay Foundation in collaboration with the Central Bank and the Ministry of Education to the most promising student in the Bahamas. Graduated from Queen’s College, he went to Vassar, graduated, worked in the financial sector in Hong Kong, later in New York, for two years in the Ministry of Foreign Affairs where he was the only Bahamian employed of the government at the time who was fluent in Mandarin. He was recruited by Baha Mar where he was encouraged to do an MBA and again won a scholarship from the Lyford Cay Foundation.

Along the way, he discovered a love of rowing. By the time he graduated, he was captain of his team. When he returned to Nassau, he knew the perfect place, a lake with a wide shoreline, limited activity, protected from strong ocean breezes. All Chea had to do was get permission to use the lake, form a club, get some equipment, get the club recognized by the international federation and yes, he should be of interest to a few people to a sport that did not exist in any formal way in the Bahamas before.

Chea loved rowing too much to let a few details like that get in the way. In 2012, he launched the Nassau Rowing Club. Today he has a full-time coach. Interested students from underserved schools and communities can participate for free. Chea isn’t the only one rowing to a new finish line. Others help raise funds. They organize transport for pupils coming from schools in the city centre. Everyone has gear to use and a rowing blazer and Chea not only introduced teamwork and coordination to a rowing culture in the Bahamas, he helped put rowing on the Caribbean map.

With some 54 members, the Nassau Rowing Club is the largest in the region.