In a report from Sammobile, Samsung’s popular note-taking app, Samsung Notes, gets all the features specific to the Galaxy Note 20.

Samsung unveiled the Galaxy Note 20 series at the Unpacked event this month. The phone is already in vogue for all the right reasons. In addition, the phone also brings new features to the note-taking app, Samsung Notes.

Well, now all the new features you could enjoy on the Samsung Notes Galaxy Note 20 app can now be used on the old Galaxy Note flagships.

The new version of the Samsung Notes app will be available for the 2019 Galaxy Note 10 and other eligible Samsung devices. There are some cool new features as well as some big additions in the latest version.

Let’s take a look at some of the new features you’ll see with the updated Samsung Notes app;

With the new Samsung Notes app, the OEM also introduced a new file system as well as a new file format. This means that the old notes stored in the phone must be converted to the new file format if you want to edit them or move them to another folder.

In particular, the old format files will be saved in another “Old Format” notes folder. However, users will still be able to read and open the notes in the old format. 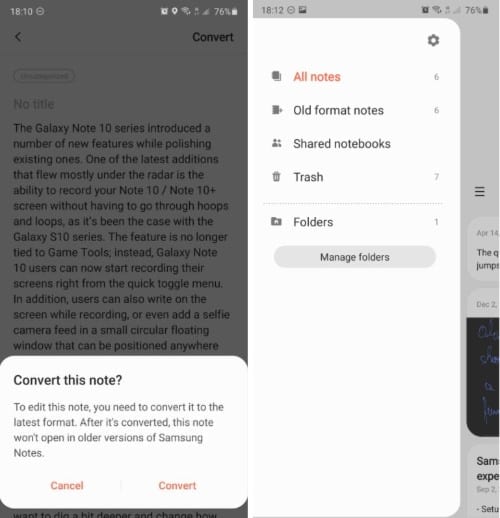 The new version of Samsung Notes app also brings new functionality that allows you to create folders and subfolders. This will help to differentiate your notes and will be accessible more easily.

There is now a “Trash” folder which will basically store all of your deleted notes. You can restore them and place them in a new folder from the recycle bin.

The new user interface of the Notes application is more aesthetic and now offers more flexibility in terms of writing or sketching functionality. Now you get individual pages, the ability to import PDF, save as PDF, Microsoft PowerPoint.

The new pagination system (templates) offers two buttons for handwriting and text modes which are now placed at the bottom of the toolbar. Also, the file name and title are displayed where the toolbar was in the old Samsung Notes app.

Old functionality has been streamlined and simplified. The “record audio” feature now allows you to record audio in real time while you write in the app. The audio will play in sync with your writing.

In addition, you can also import drawings and text boxes into your new Notes application. So overall, the new Samsung Notes app offers more flexibility.

This new version of the Samsung Notes application brings all the features specific to the Galaxy Note 20. In addition, there is less of a learning curve for the users, which makes the use of the new features more convenient.